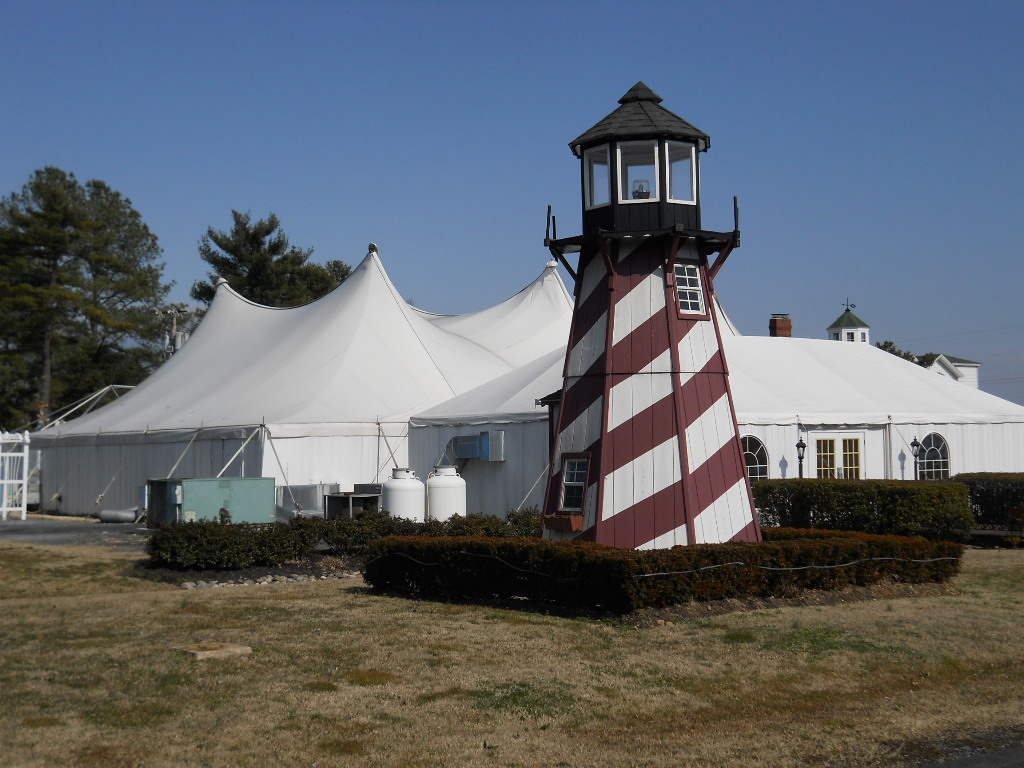 Permanent Party Tent from Armbruster at the Wellwood Yacht Club

In 2005 the Wellwood Yacht Club in Charleston, Maryland purchased an Armbruster 60×80 EuroTent as an event space and had this tent installed ever since. Yes, the Armbruster EuroTent has been installed permanently longer than any other EuroTent to date. Surviving multiple hurricanes, high winds, and snow storms – this party tent charges on for the owner of the Wellwood, Larry Metz.

Larry installed this tent with much help and advice from Armbruster. Larry wanted a tent space at the Wellwood that would last him more permanently. With advice from Armbruster secure permanent footings were installed, heating system not only for customers but to keep snow and ice build up off, and hard walls were installed on sections of the tent that was getting blasted continually from high winds. In addition, catering and entrance tents (the Armbruster Celebration frame tents) were installed all around the main event space to add to the versatility of the site. Custom flower boxes were installed to cover the anchor and ratchet points in high flow areas. The tent also features internal flooring, chandeliers, lighting, hard double doors, and dance floor. This has allowed for an event space that can be used year round.

How did the Wellwood pass code officials? Armbruster worked closely with architects in the area to classify the Armbruster tent as a tension structure in the International Building Code. Because of the way that Armbruster builds their tents this tent is no average pole tent. Build with heavy duty 23 coated fabrics, stainless steel hardware, catenary band reinforcements, rated load bearing rings, and no exposed stitching. This is like no other tent. The fact that this tent had endured so much and is still standing is a testament to it’s quality.

Recently the President of Armbruster, Hellar Armbruster, visited Larry at the Wellwood to personally inspect and assess the tent. Hellar was amazed to how well this tent has withstood the elements being this close to the Chesapeake Bay. Hellar reported to Larry that the tent has weathered phenomenally well for the amount of exposure it has taken in this location. Larry described how well the tent performed under the last Hurricane it was exposed to and the snow storms during the winter. With a combination of heat and using poles to push off heavy snow, Larry was able to prevent heavy snow and ice build up on the tent.

What makes Armbruster unique is the materials and craftsmanship we put into all of our products. We build tents that are not only strong, but built to last. Our philosophy is to build the finest most robust tension structures on the market. This tent is one of our best examples.